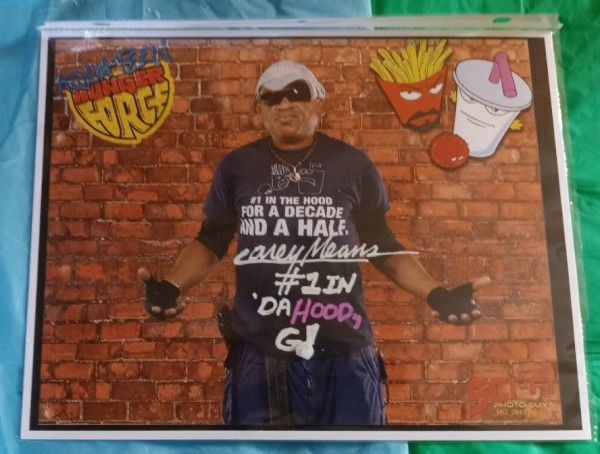 As part of our effort to raise money for the West Virginia Chapter of American Foundation for Suicide Prevention we will be holding a live auction. We have gathered some donated autographed pictures to the cause. Some items might end up in the raffle, but most of these will be in auction.

Here is a selection of items from that will be auctioned off.

We are once again on the road to promote at another convention. This time up to Morgantown for WV Pop Con x Let’s Play Games Con on Saturday August 27th and Sunday August 28th at Mylan Park.

WV Pop Con will have creators of comics, books, and crafts; cosplayers, cosplay groups, and vendors with all kinds of things to sell. Featured guests for this year are Brutus “The Barber” Beefcake, YouTube star Pittsburgh Dad, comic creators Brett Breeding, Ron Frenz, and Patrick Olliffe. There will be panels and a cosplay contests on both days (kids and teens on Saturday; adults on Sunday.

LPGWV is hosting gaming for this year. They have several table top games you can sign up for. Plus they have been working on some video gaming for all.

Expect plenty of games to play at our table as well. Come by, chat, and check out a game.

Mike Ferry and his wife Ann started sharing their life size statues with the comic world for pictures and for a lot of fun.

They collect donations on a voluntary basis only because not everything at a comic convention should cost more than a smile.

They currently have the following life size figures:

Hero Initiative is a charity near and dear to their hearts.

They learned about Hero Initiative at Gem City Comic Con about 2 years before Josh Medors passed away from Cancer.

His story and many others can be see at the following website:

DualCon will be out promoting at another convention, bringing along several games for all to play.

Come see us at Pikeville Comic & Toy Con is Saturday August 20th from 10am-6pm in Pikeville, KY at the Appalachian Wireless Arena.

They will also have bunch of vendors, artists, crafters, other creators, and more selling all kinds of things. Plus a costume contest.

Tickets are $12 per person and free for kids 10 and under.